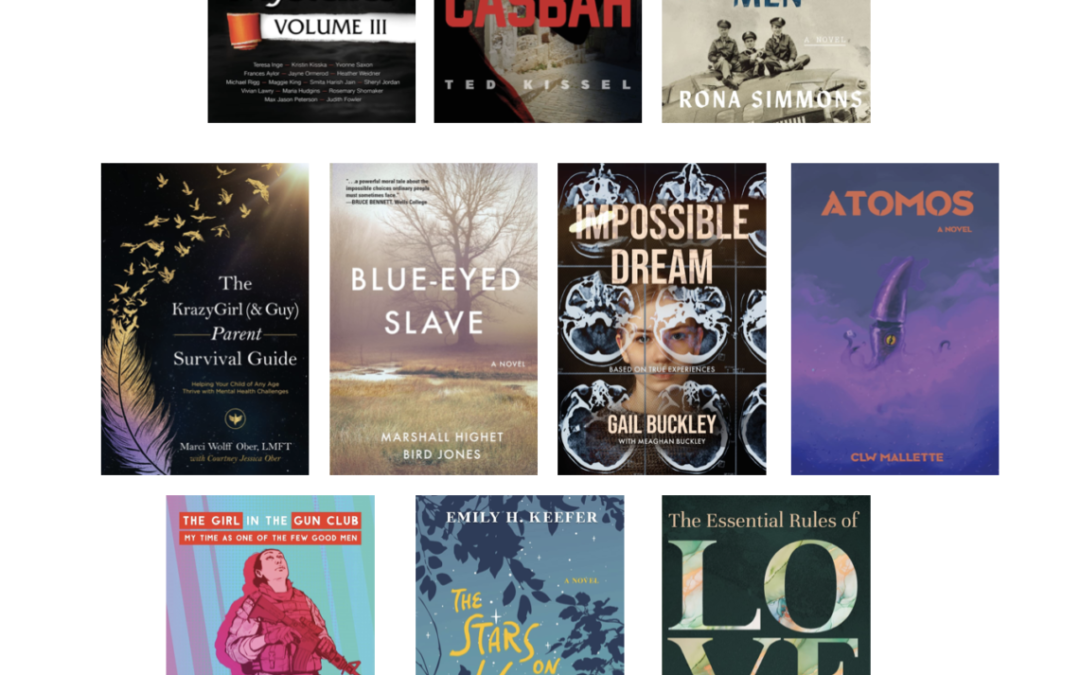 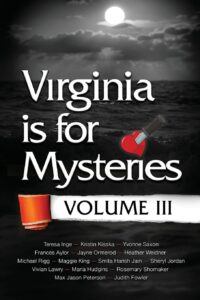 Virginia may be for lovers, but to fifteen authors, it’s more sinister. This anthology of sixteen short stories, set in the Commonwealth, features Virginia landmarks and locations such as the Church Hill Tunnel, the Virginia Beach Boardwalk, the Historic Cavalier Hotel, St. Luke’s Historic Church, historic Ashland, and the Assateague Channel, to name a few. Be transported across the diverse backdrop of the Old Dominion to a unique and deadly landscape, filled with murder and mayhem. 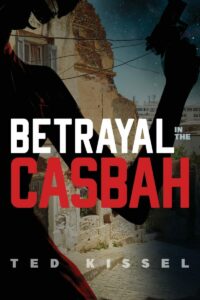 It’s the early 2000s in the US embassy, Algiers. US military attaché and decorated fighter pilot Colonel Mitch Ross needs a dose of reality and relief from the constraints of the diplomatic life. He catches a break of sorts when he survives a brutal knife attack one evening after attending a diplomatic reception.

Nursed to health by the beautiful and mysterious Abella, Mitch returns to duty and is approached by the CIA with a covert mission: to rescue and bring home a downed American pilot being held by terrorists in Algiers. As he plans and prepares for the mission, Mitch and Abella become confidants and lovers, and Mitch discovers she is more than just a nurse working in a military hospital. Together with longtime friend and French colonel Yves Dureau and Mitch’s assistant, Army Warrant Officer Dave McQueen, Mitch and Abella will risk their lives to bring the American POW to safety. 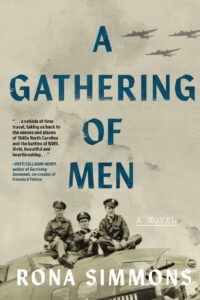 Candor, North Carolina. The town barber brandishes a copy of the May 1927 Charlotte Observer-on the front page, Charles Lindbergh’s Spirit of St. Louis on its cross-country flight. At the outskirts of town, best friends Lake, Roger, and Jim take turns hurling their wingless crate down a hill. Eyes closed, they imagine their future alongside Lindy.

Pearl Harbor changes everything. The boys will have their chance to fly-not over North Carolina farm fields, but across Germany on bombing runs, facing a determined Luftwaffe. The odds of completing their tours of duty are slim.

A Gathering of Men is the account of the boys who board their aircraft for the first time and the men they become in the blink of an eye. The terrors they witness and the pressure to go up again and again and again brings them to the breaking point. It is a moving tale, based on a true story, about shattered dreams and enduring friendship, duty, and honor. 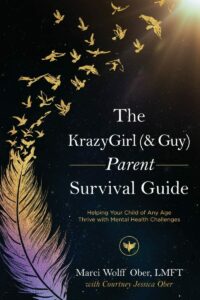 “It was the dead of winter when fourteen-year-old

Courtney ran away from home. She snapped and rushed from the house in the middle of a family movie night, during a raging snowstorm, after dark in her socks . . .”

Marci believed that her “krazy” past was far behind, until the torch was unknowingly passed to her daughter, Courtney. Navigating the road out of KrazyLand as a mom would be the most difficult and important challenge of her life.

Any parent who has stayed up until sunrise, frantically searching the internet for information about their child’s severe mood swings, suicidal thoughts, or other concerning behaviors, will welcome this easy-to-understand and practical guidebook. Written from three unique and interconnected vantage points-Marci, a seasoned therapist and warrior mom; Courtney, a sensitive teen growing up in the social media spotlight; and an inspiring selection of leading medical and wellness professionals-The KrazyGirl (& Guy) Parent Survival Guide is the definitive compass and road map out of the darkness, toward a lifetime of satisfying and sustainable mental health and wellness. 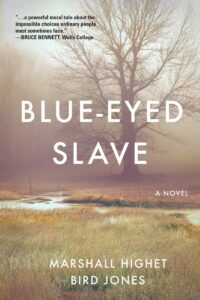 IT IS 1764 IN CHARLES TOWN, SOUTH CAROLINA, and Harry’s school for enslaved children has been in full swing for twenty years, despite the Negro Act of 1740. An enslaved person himself, Harry finds an unlikely ally in Hannah, a young Jewish girl from town who tutors Bintü, a recent acquisition of the prominent Reverend and Mistress Harte.

But his school begins to feel the pressure as political winds shift and the Stamp Act causes revolt, uproar, and armed protests. Caught in the crossfire of impending revolution and increased animosity towards an educated enslaved population, Harry-and ultimately the two girls-will find their faith and integrity sorely tested.

With relentless attention to historical accuracy, Blue-Eyed Slave levels an unflinching gaze at the cruelties of enslavement and shows that although human cruelty may be universal, the same is true for kindness and bravery. 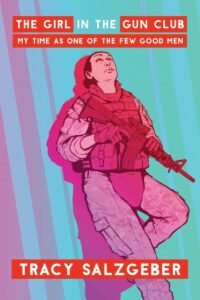 She should’ve known something was up when the USMC recruiting office was open on Christmas Day.

This is the secret story of an odd young woman who chose to enlist in the Marine Corps to escape her hometown in Florida. Now she’s figuring out her way around one of the most testosterone-engorged branches of the US military.

Tracy’s adventures will take her around the world to foreign brothels, bars, and war zones. Through blood, sweat, tears, and lots of needless confusion, she gives us a glimpse into the life of the extremely rare female Marine. Told from the perspective of a low-ranking enlisted Marine, The Girl in the Gun Club is a story about striving to fit in while hopelessly sticking out. 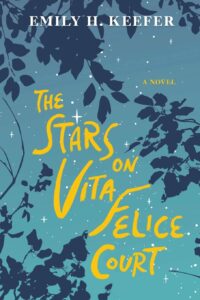 VAL BECKLEY IS FACING WHAT MANY TEENAGERS DO-a yearning to escape her small town in hopes of becoming something more. Feeling trapped in West Virginia, Val convinces herself that she has found the new start she’s looking for in the desert of suburban Mesa, Arizona, with the Church of Jesus Christ of Latter-Day Saints, also widely known as “the Mormons” or “LDS Church.” Discovering new meanings of home, love, and family, Val takes a journey that leads her to the most unexpected discoveries of all: what resides in her own heart, what creates a happy life, and where she truly belongs. 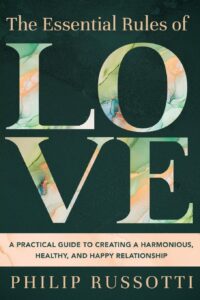 The Essential Rules of Love distills love and relationships into their component parts, including psychological, chemical, neuroscientific, and evolutionary factors from both a functional and pragmatic approach. Musical and literary references sprinkled throughout add a flavor not often seen in books of this genre.

The book begins with an examination of what love really is-so we can keep it once we’ve found it. Each chapter explores the process of love and scrutinizes the basic influences on the development, creation, and maintenance of a strong, positive relationship. You’ll learn the emotional and psychological benefits of having a loving partnership and learn to navigate the pitfalls surrounding sex. This book also provides easy-to-understand guidelines, concrete advice, and a road map on how to put the underlying philosophical, scientific, and psychological principles into action, crystallized into ten “Do’s and Dont’s” for quick reference.

Finally, The Essential Rules of Love explores love and death and shows how and why the strength of a powerful bond survives death. It is hard to imagine love after the death of a partner or spouse, but the lessons in this book provide the blueprint on how to achieve such a strong union. 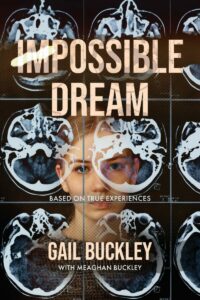 “If someone does not come along and provide us the opportunity, . . . we will never know what we are missing or capable of. And neither will they.”-Anna

Anna’s quest to understand how the brain operates might have started out as an escape from the confines of her autistic existence, but when her housemate Daniel is in grave danger of losing all that he holds dear, she vows to do everything in her power to see to it that his remarkable artistic talent survives the amputation of his gangrenous hand. Anna doggedly pursues every lead and, in doing so, discovers that the very thing that might solve Daniel’s problem could reshape and substantially improve the health care of all those with disabilities.

Through her singular focus on helping another, Anna sheds a light not only on the compassion and selflessness of those with autism but also on their insight and nonverbal intelligence. But will her voice make a difference? 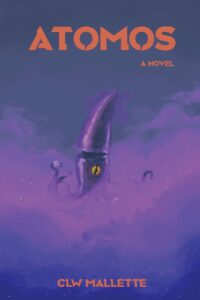 ATOMOS HAS NEVER KNOWN HIS PAST and has no idea what future his guardian intends for him. Forced to leave his small secluded island in the South Pacific when his guardian disappears, the young adventurer finds himself in a world he doesn’t understand-and which doesn’t understand him. When he discovers a giant trash vortex, he begins to understand the scale of the damage that’s been done to our planet, and the necessity of reversing it, if possible. But Atomos knows that change never happens by chance alone. To succeed on his quest, he must find help. But what else will he lose along the way? Everything hangs in the balance.