A Doughboy Named Carl Helps us Celebrate Our Veterans 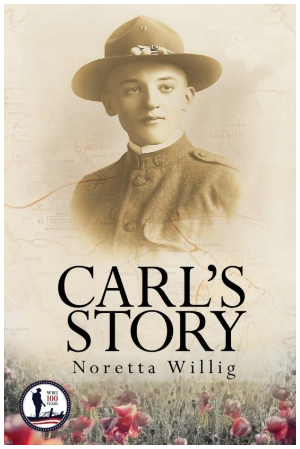 Shortly after we opened the doors here at Koehler Books back in 2010, we started receiving submissions from men and women who either served in the military, still serve, or have family or friends who served. This made a great deal of sense to me since we are headquartered in Coastal Virginia, home to a tremendous amount of military personnel and their families.

We have Oceana Naval Air Station, Norfolk Navy Base, Little Creek, Langley Air Force Base, Dam Neck, Fort Story, and that’s probably only half the list. Our area is made resilient and better by hundreds of thousands of dependents and active service members from the United States Army, National Guard, Air Force, Marines, Navy and Coast Guard.

When it became clear that these military submission were not a temporary thing, we started Battle Flag Books, an imprint dedicated to authors who are affiliated with the military through their own service or through their book. Of the nearly 350 books we have published, over 25 fit into this military genre.

Our mission as a publisher is to work with our authors to produce and publish high-quality books that are attractive to readers, and life-giving to the author. Many authors simply want to recored their lives through a memoir or biography. They want to leave behind something important for the world to see, so that they may be remembered in the right way. This is a legitimate desire, for every life is important.

Our aim is to honor that desire by helping them create the best possible book we can. Some are professional writers. Some are not. But all have a story to tell and so we honor them by working hard to make their books honorable, the best they can be.

Nori Willig is one such story. Nori came to us with a book about her uncle Carl, titled Carl’s Story. I nearly cried when I saw the photo of Carl. Absolutely beautiful in his innocence and honest gaze. We knew immediately that photo had to be on the cover. All that had to be added were the poppies that grew on so many battlefields of WWI, after the dead were buried. Nori taught English literature for 33 years, and her writing and language is exquisite. She does not mince words, she paints with them.

Carl’s Story begins in the woods near St. Mihiel, France, almost a century ago on September 16, 1918. On that victorious day, when the US Army won its first battle in Europe and the war was just days from ending, Carl Willig, a doughboy in company H and the uncle of author Noretta Willig, was killed.

Carl’s story is only one story in our military imprint, but it gives you a good idea of the passion and depth that our authors bring to their stories to honor their loved ones. So on this Veteran’s Day, we salute Carl Willig and all of our fallen heroes for so willingly fighting and dying and living for our sake, so that we here at home can continue to enjoy the fruits of freedom.

Thank you Carl, and thank you Nori for giving him life again.