Publishers Weekly: The Challenge of Writing Humor in Dark Times 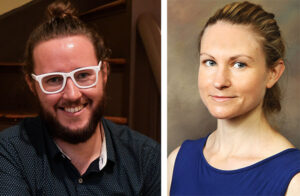 By Whitney Phillips and Ryan M. Milner
From Publishers Weekly

The two of us blinked at each other. We had just swapped edits for chapter one of our latest coauthored book, You Are Here: A Field Guide for Navigating Polarized Speech, Conspiracy Theories, and Our Polluted Media Landscape, and there was a problem. This chapter focused on the Satanic panics of the 1980s and ’90s, which we argued marked the beginning of the network crisis: a period of intensifying polarization and information disorder now central to our politics. For the second time, we’d rejected each other’s suggestions. Whitney was being too somber for Ryan, and Ryan was being too slapstick for Whitney. Clearly, we needed to have a conversation.

So we opened negotiations. Front and center was the question, on a scale of one to 10, how funny should You Are Here be? Ryan said seven. Whitney said two. We’d developed the one-to-10 scale while working on our previous book, The Ambivalent Internet; it was a way of posing questions, soliciting answers, and brokering compromises with minimal ego bruising. This was how we made decisions about everything from language choice to argument structure. But this was the first time we disagreed about jokes.

Previously, humor had characterized our work. A running editorial goal as we researched, drafted, and edited The Ambivalent Internet was to make each other laugh. We even opened its second chapter with a story about our own raucous laughter as we prepared to give an aggressively absurdist, meme-heavy academic presentation about the book.