“A smart and touchingly sympathetic fictional portrayal of an enigmatic woman.” -Kirkus Reviews

A BookLife Review is a respectful, honest, detailed, and knowledgeable 300-word review of one’s book that includes a variety of marketing insights, useful information, and highlights the book’s strength all crafted by a professional Publishers Weekly reviewer who is an expert in the genre or field of the book.

Q & A with Pamela Hamilton, award-winning author of Lady Be Good: The Life and Times of Dorothy Hale: 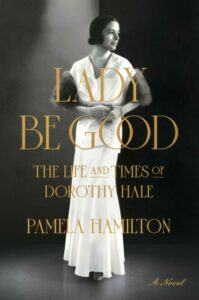 1. The imagery in your novel has been praised time and time again. What did your creative process look like while developing such vivid scenes?

I’m enraptured with the process of examining a characters’ life experiences and seeing the world through their lens—it’s an exploration of the human condition. I did extensive research on Dorothy Hale and Clare Boothe Luce (and the other historical figures in Lady Be Good); they’re fascinating, complex women whose transformation, struggles, and victories, sparked a lot of emotions. Research was the starting point for a more in-depth exploration of their physical and verbal expressions and their internal life. The fictional characters are drawn purely from my imagination and occasionally inspired by people I’ve known. Writers are observers, notetakers, armchair analysts; they’re curious and interested in detail. It was a great joy creating the characters, scenes, and dialogue. When you’re consumed by the story, you become each person and place yourself in the scene. You contemplate the traits or ticks that could illustrate their conscious and unconscious thoughts. You think you know how the narrative will unfold but the characters lead you in a new direction; they say things that surprise you, they take on a life of their own. I hope readers will feel deeply connected to them and experience a wide range of emotions.

The story also takes us behind the Gilded curtain of the 1920s Smart Set, “Polite Society,” which perhaps doesn’t always live up to its name. It captures the struggles women faced; the incredible glamour, fashion, and grandness of the time; and American culture at a pivotal moment in our history. I had always been drawn to that era; it was a time of extraordinary art, music, and literature; a time of incredible creative and cultural combustion. My interest in literature, music, movies, art, architecture, fashion, and politics gave me a good sense of the period, which was, of course, incredibly helpful when I decided to write a book and recreate that world.

2. What do you consider to be one of the most important messages in Lady Be Good?

Threaded throughout the book are themes about life purpose, friendship and betrayal, class and culture, and the price of fame. The most important message might be different for each reader, so I’ll touch on a few. The main characters, socialites Dorothy Hale and Clare Boothe Luce, break from convention to realize their dreams on their own terms. They define the modern woman of the 1920s. They’re vulnerable, yes; and they struggle in a world where women in the upper echelons of society are expected to stay in their place: host charity balls, give birth, and tend to their husbands. For them, it’s unfulfilling. As Luce wrote, “Money can’t buy happiness, but it can make you awfully comfortable while you’re being miserable.” Women didn’t have many opportunities, but Hale and Luce are fearless and resilient, which prove to be essential qualities on their rise to success and overall contentment. Fearlessness is freedom. Their smarts, sense of humor, and joie de vivre also serve them well!

There are many misconceptions and inaccuracies in public accounts about Hale and Luce, which underscores an issue that resonates with readers: The simple stroke of the pen can raise one to the apex of the good life as easily as it can destroy a name. Truth isn’t defined by black, bold, headlines—there could be more to the story. As the narrative unfolds in Lady Be Good, we see how mindless gossip and the tabloid press can change public perception on a whim. Many people today are considering their legacy, and this story illustrates how delicate legacies can be.

3. Lady Be Good has won its fair share of awards since publication. Has its reception in the literary world been what you expected?

Its reception in the literary world has been a wonderful surprise! I’m deeply grateful for the acclaim and positive feedback from readers; it’s made me tearful on many occasions. Awards didn’t cross my mind while I was writing; I was consumed by bringing the story to life. I owe a debt of gratitude to John Koehler, who took a leap of faith in signing a debut author and has given Lady Be Good a splendid home.

Pamela Hamilton is a writer and consultant who has worked with notable figures in business, US intelligence, music, and the arts, and has covered some of the most significant events of the twenty-first century. For more than a decade she was a producer for NBC News, and she was a producer on the award-winning documentary Grateful Dawg. Based in Manhattan, she serves on the board of the Society of Professional Journalists’ Deadline Club and on the advisory board of the Art Deco Society of New York.