Zone of Action: A JAG’s Journey Inside Operations Cobra II and Iraqi Freedom 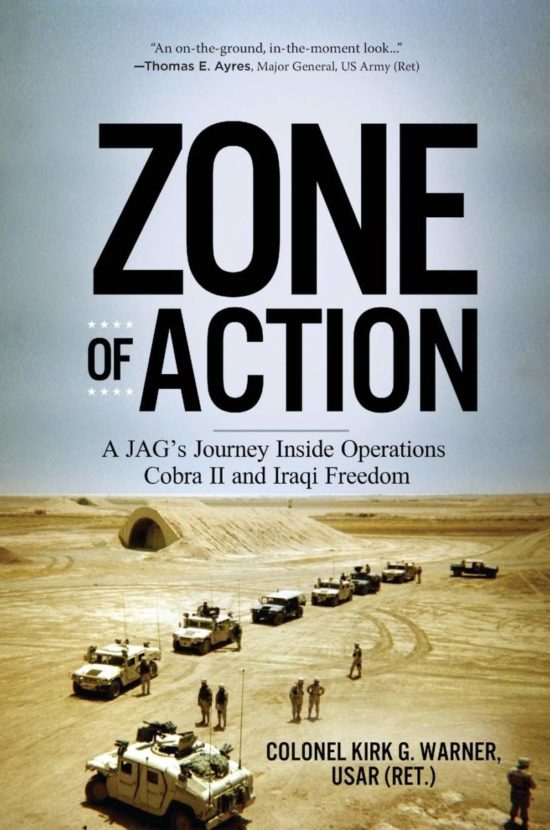 Zone of Action is a front-row seat to major combat operations, leadership, tragedy, and nation-building. These are the war-theater observations of a senior Army JAG constantly in the thick of the war, the occupation, and the Iraqi community. He tells the inside-the-war-room story of Operation COBRA II and Iraqi Freedom during the march to Baghdad and the nation-building beyond. It details his official and inner journeys and those of soldiers and Iraqis encountered along the way. It reveals the sacrifice of many unsung heroes and the challenges of liberating and occupying a broken country. It shows the character of our soldiers and leaders . . . and the occasional lack of it. But above all things, it is an honest, often humorous romp through war by someone deep in the arena.

Kirk Warner is a retired Army JAG Colonel who served in a variety of senior military lawyer roles inside the Coalition, Third Army, and V-Corps during the march to Baghdad and during the early nation building in Iraq. His weekly war chronicles were followed nationwide and at the highest levels of our government. He was a featured "hero" on CNN's Lou Dobb's Tonight. After returning from the war theater, he became deputy legal counsel to three Chairmen of the Joint Chiefs of Staff and Staff Judge Advocate to a national command. He has commanded at all levels of the Army. He is a partner and senior trial lawyer in Raleigh's largest law firm representing Blackwater and many Fortune 500 companies in courts throughout the country. He is a graduate of the Army War College and has five graduate degrees. Kirk lives in Raleigh, North Carolina with his wife Diane and their dog Wally.