How did alternative publishing companies develop?

Not long ago, traditional publishing was the only show in town, and big publishers controlled what happened with books and what readers could choose from. A traditional publishing deal is generally given to only the finest works, often those that come through an agent, which signifies higher quality. The author generally receives an advance against royalties, royalties based on list price or Net, and pays no expenses or fees. The publisher takes all financial risks.

Publishing changed with the advent of self-publishing around the year 2000. It created an opportunity for more writers to get professionally published. Or poorly published, as was often the case. At first in the rush to get published, writers and the companies they hired did not follow the highest standards of literary and publishing excellence. Writers refused to have their work edited and allowed sloppy design standards to be used.

The resulting outcome was a mess. Brick and mortar stores cringed when new self-published authors came through the door with thin books that had awful covers and terrible editing. The literary world and book critics reacted negatively and essentially said that self-published books were bad, calling them acts of vanity and publishers who put them out vanity publishers. Big publishers agreed and continued to dominate the landscape.

But then something strange happened: people started reading a lot of the self-published books. Readers after all are the final arbiters of which books will succeed. Collectively, they are brilliant and hold the keys to publishers and authors selling books. Amazon and other online booksellers said, “We will give you a chance no matter who you are,” and books began to sell. Millions of them. Some self-publishing authors became rich, and the word got out, driving yet more writers to publish their work.

CreateSpace, iUniverse, Lulu, and many other self-publishing companies sprang up to serve the growing demand to be published. Quality gradually improved. Or did not, depending on the author. Small publishers jumped in to offer hybrid or co-publishing deals to authors, fee-based but with more hands-on collaboration and a higher level of creative development.

Then an amazing thing happened. The big publishing companies made the jump into fee-based publishing and formed or bought companies that catered to the growing market of authors who wished to be published at any cost. Case in point was the acquisition of Author Services, Author House and other imprints by Penguin Books. While Penguin was excoriated by this decision, some think it was a smart financial move to get in on a growing market. Random House and the rest soon followed.

In the old days writers only had one option for getting published: traditional big publishers by way of agents. Now there are a myriad of ways. Countless ways. Too many to consider.

So what’s a writer to do? 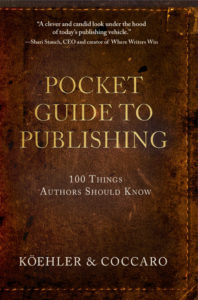 AUTHOR 101 is a series of articles that answer typical questions posed by writers and authors. Some of the answers comes from the Pocket Guide to Publishing, by Joe Coccaro and John Koehler. The book is available as a free download at KoehlerBooks.com. This material was written to help writers and may be used and copied as it is useful.

John Köehler is the author of seven books, an award-winning graphic designer, 1991 Boomerang World Champ, and is the founder and publisher at Köehler Books.