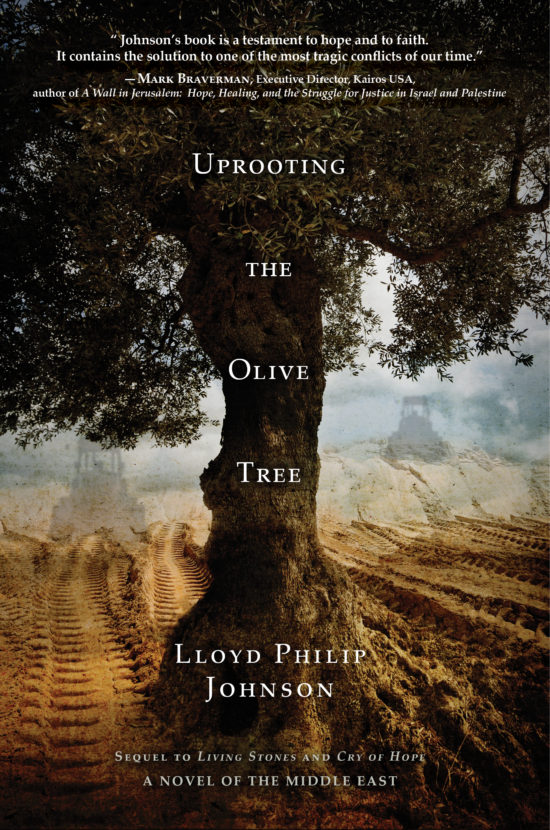 When newlyweds Ashley and Najid stay overnight with Fatima’s family in Bethlehem, Israeli soldiers attack and carry off 10-year-old Ali to prison in Israel. The lead Israeli soldier begins to regret the monster he has become “defending” his country from “terrorists.”

Najid’s West Bank friend Faisal tries to stop the bulldozing of his ten acres of olive trees, and is nearly killed by the bulletproofed Caterpillar bulldozer. Najid and Ashley enlist legal help from an Israeli Cabinet member to help bring justice against the harsh Israeli laws. When the cabinet member physically thwarts settlers taking over a Palestinian home in East Jerusalem, his troubles escalate.

Najid’s friend Chaim, an Israeli helicopter pilot, faces intense pressure from his commander to renounce the letter he signed refusing to fire on civilians. Would he allow his career to go down in flames, or would he fight in the 2014 Gaza war?

Najid’s younger brother Sami, now in Haifa University, falls in love with Fatima. Can a Palestinian Christian from Israel marry a West Bank Muslim girl who now follows Jesus? What can Ashley do to mollify Fatima’s father’s determination to not lose his beloved daughter to a Christian family in Israel…where he cannot go?

Lloyd Johnson is the author of Living Stones, Cry of Hope and Uprooting the Olive Tree, published by Köehler Books in 2013 to 2016. He is a retired surgeon who turned to fiction writing to share his special interest in the Middle East. Johnson is a member of a Seattle writing group, and blogs regularly on Israel and Palestine. He is a clinical professor emeritus at the University of Washington in the Department of Surgery, fellow in the American College of Surgeons, and past president of the Seattle Surgical Society. He authored 26 scientific articles in peer-reviewed journals and texts. Johnson has worked and traveled extensively overseas, including Asia, Africa and the Middle East, and served for six years as volunteer executive director and board member of a humanitarian NGO in Central Asia. The author lives with his wife Marianne in Edmonds, Washington where they enjoy their adult children and grandchildren.