The Wit and Wisdom of Donald J. Trump 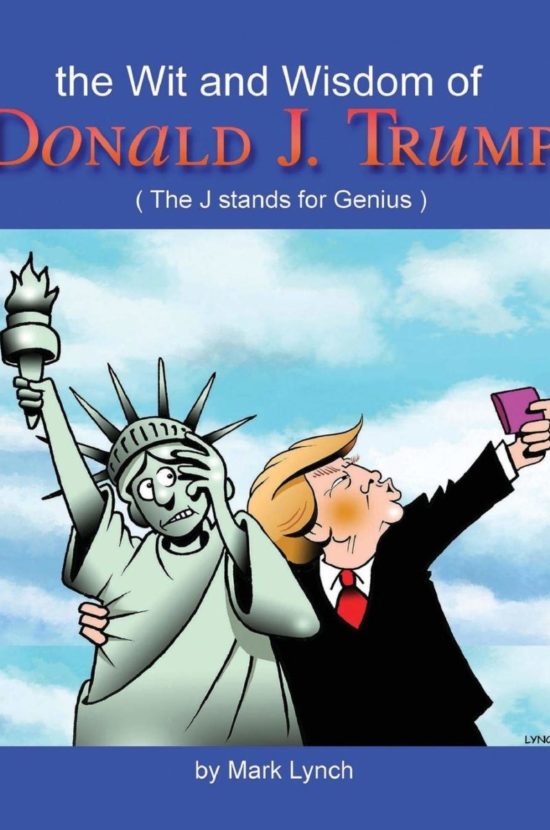 When Donald Trump speaks and tweets, the world holds its breath. He vents his spleen at anything and anyone at anytime. His use of social media to message his innermost thoughts and often galvanize his, (as Hilary puts it) ‘Basket of Deplorables’ following, makes for unmissable reading, no matter what your political views.

This is a collection of 83 full-color hilarious cartoons, along with the Commander in Tweet’s most outrageous claims, quotes, mis-quotes, alternative facts and ‘I can’t believe he said that!’ moments.

“My IQ is one of the highest – and you know it! Please don’t feel so stupid or insecure; it’s not your fault.” –Donald Trump

Cartoonists had a genuine God-send with the election of Donald J. Trump, and here, one of their legion, Mark Lynch, let’s his pen and paint off the leash in this book, to lambaste, body-shame and parody the self-described genius. We suspect the President won’t be endorsing this collection, because it’s, ‘Hair Raising!’

Former editorial cartoonist for the national newspaper, ‘The Australian’. Author of ten cartooning books, HarperCollins publishing the most recent three. His cartoons have appeared in such publications as, The Washington Post, Readers Digest, The Saturday Evening Post and newspapers in Australia, USA, South Africa, Canada, NZ, Germany, United Kingdom and Sweden. Mark Lynch has won 54 national and international cartooning awards including National cartoon of the year (twice) and a prestigious ‘Stanley’ award for Australia’s best single gag cartoonist. He has had two exhibitions, solely of his cartoons in Coffs Harbour city, NSW. Lynch has appeared on numerous TV, radio programs, (channel 9, 7,10,2 and SBS in Australia and ABC radio.) as well as the print media promoting his books and cartoons. He has been an Australian National serviceman, (3rd Cavalry regiment) a flight attendant, (QANTAS Airways) Restaurateur, (Paddington NSW) Songwriter, (collaboration with Keith Potger from ‘The Seekers’) Commercial/industrial real estate owner, husband to Jennifer Lynch, father to Patrick and Jack Lynch. He is a keen surfer and Rugby Union fan.