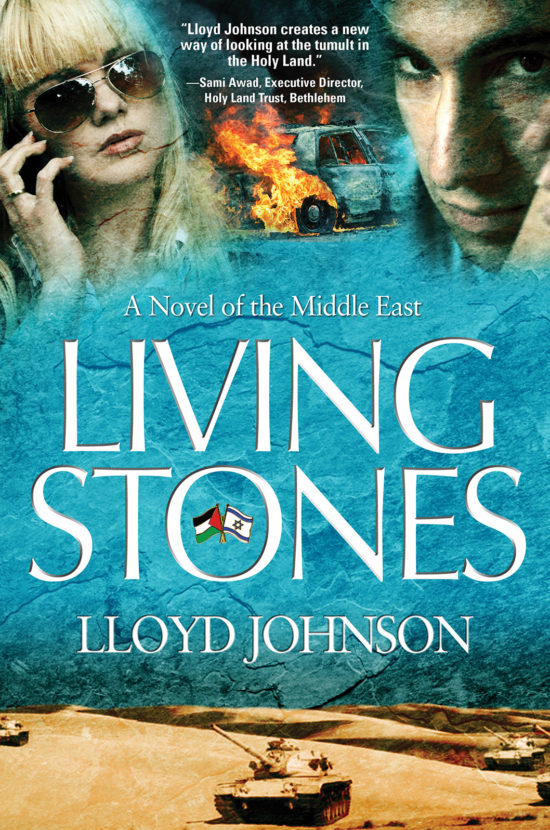 She was in the wrong place at the wrong time. Nearly killed in Seattle during a jihadist bombing, Ashley recognizes the synagogue bomber and is later stalked by a hired Muslim hit man in Israel. There she visits the home of Najid, the Christian Palestinian scholar she had left behind at the University of Washington. She falls in love with him, putting her at odds with her Zionist pro-Israeli convictions.

On the run, Ashley sees the beautiful rock churches and shrines. But the living stones, the people of the Holy Land intrigue her. She meets Jews and Palestinians, Rabbis for and against Israeli settlement expansion. Gentle Palestinians like Najid’s family, and those in the West Bank suffering under military occupation. Both Muslims and Christians living peacefully together.

Najid and Ashley find the bomber in Seattle despite the FBI dragnet put out to arrest him. Living Stones is the story of an American woman coming to terms with the truth of the Middle East, and the lies she had been fed. Will she survive the forces that threaten to tear her apart?

Lloyd Johnson is the author of Living Stones, Cry of Hope and Uprooting the Olive Tree, published by Köehler Books in 2013 to 2016. He is a retired surgeon who turned to fiction writing to share his special interest in the Middle East. Johnson is a member of a Seattle writing group, and blogs regularly on Israel and Palestine. He is a clinical professor emeritus at the University of Washington in the Department of Surgery, fellow in the American College of Surgeons, and past president of the Seattle Surgical Society. He authored 26 scientific articles in peer-reviewed journals and texts. Johnson has worked and traveled extensively overseas, including Asia, Africa and the Middle East, and served for six years as volunteer executive director and board member of a humanitarian NGO in Central Asia. The author lives with his wife Marianne in Edmonds, Washington where they enjoy their adult children and grandchildren.